We have posted the following pages on our site to provide you with some up front technical support. 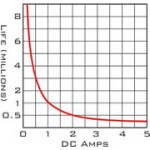 The switches have a rated mechanical life of over ten million cycles, but electrical life is dependant on a number of factors. The switch load (in Amps) and proper diode protection are the two biggest things that can affect switch life. The graph shows the typical life of our switches, comparing switch load in Amps to the number of on/off cycles that can be expected. Switch life will be greatly reduced if suppression diodes are not used (See the section on surge suppression). The load capacity of the switch depends on the type of load the switch is switching and the material used for the contacts. Standard Scorpion Technologies switches use silver contacts for maximum load carrying capacity and long switch life. If the switched load is less than 20 mA, better switch performance will be obtained using switches with gold contacts (consult factory).

Here are the IP and NEMA environmental rating systems.

Technical Support – Multiplexing The faceplate switches provide a positive voltage to both segments of each individual valve. The trigger switch provides a ground to only one of those segments at a time. For a valve solenoid to energize, both a positive and a ground voltage must be supplied. The diodes are to prevent unwanted back feeding of signals. Multiplexing is a way to add more handle functions without adding large quantities of extra buttons. Typically a faceplate switch will perform one function when the trigger is not pressed (i.e. extend cylinder #1), and a second function when the trigger is pressed (i.e retract cylinder #1). 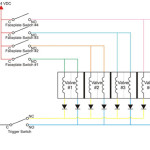 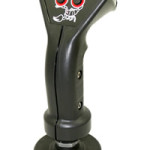 A fuse is basically just a short piece of wire, carefully chosen in terms of its diameter and composition so that it will conduct current continuously up to a certain level, but melt if the current rises significantly above that level. It is also designed to become an open circuit when it does blow, automatically switching off the current before any serious damage is done. Fuses used in mobile equipment are usually one of two types:

In this type, a wire is mounted in a small glass or ceramic tube with metal end caps which form the  electrical connections to the rest of the circuit. The tube forms a physical guard for the fuse, so that when it does blow the melted wire can’t fly 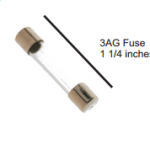 out and cause damage or injury. The clear glass tube also lets you see when the fuse has blown. There are many sizes of cartridge fuse, but two are commonly used in mobile electronics. The larger is a 3

In this style fuse, the wire is encased in a flat translucent plastic enclosure with two flat terminals protruding through one end.

The internal fuse wire is typically visible through the side of the fuse case. Blade fuses come in several sizes.

From smallest to largest they are Micro, Mini, ATO, and Maxi, with the Mini and ATO being the most common.

Fuses are marked with the current level they are designed to carry on a continuous basis before the fuse will blow. As a general practice, a fuse should be chosen with a rating about a third larger than the normal current in the circuit to be protected. If the normal current, for example, is 3 Amps, a 4 Amp fuse would be a good choice. Keep in mind, however, that many electrical circuits (including solenoids) have a large startup “surge” current. If a fuse with too low a rating is used, the fuse may blow because of this momentary surge of electricity.Cartridge fuses have their current and voltage ratings marked on one of the end caps. Blade fuses have their current ratings marked on the top of the fuse. Additionally, blade fuses are color coded: Black = 1A,Grey = 2A ,Violet =3A ,Pink = 4A , Tan = 5A, Brown =7.5 A , Red = 10A ,Blue =15A ,Yellow=20A , Clear = 25A, Green= 30A.

Cartridge fuses also come in several versions which have different time-current relationships. The two most common types are the standard (or fast acting), and the Slow Blow (or time delay). Slow blow fuses are designed to withstand a short high inrush “surge” current without blowing and are often a good choice for applications involving incandescent lights, solenoids or other inductive loads. All blade type fuses are fast acting types.

While there are a lot of opinions about whether soldered or crimped joints are better, the reality is that either method can produce high-quality reliable wire to terminal joints. Here is a list of some of the pros and cons of each method:

This is expensive.
Crimp tools need periodic recalibration.
Reworking a bad crimp joint can often be difficult without shortening the wire.

At Scorpion Technologies (unless there is a pressing reason not to), we have settled on a policy of crimping all connectors and then soldering them as well. Our assembly technicians all have good soldering skills, and we feel that doing both processes add more of the pros than the cons.